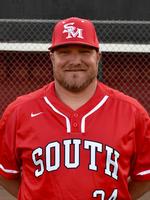 In the summer of 2017, Brian Hoop was named South Meck’s new Baseball Coach. Hoop served as head coach at Butler High School for one season (softball), leading the program to a 16-10 record and a berth in the NC State Playoffs last season.

At Belmont Abbey College, Coach Hoop served as recruiting coordinator and coached the infielders, pitchers, and base runners. Hoop mentored Emilio Pagan to a First-Team All American accolade and eventual 10th round draft pick of the Seattle Mariners. He was the highest pick in school history.

Prior to his move to North Carolina, Hoop spent two seasons at Florida State, which was capped off by a memorable run to the 2010 College World Series at historic Rosenblatt Stadium in Omaha. He coached in two NCAA Regionals and two NCAA Super Regionals.

Hoop came to FSU from Indiana State University where he served as recruiting coordinator and hitting/catching coach for two seasons. He also assisted with base running and defensive instruction during his time with the Sycamore Baseball team. While at Indiana State, the Sycamores raised their team batting average and enjoyed a 40% increase in on-base percentage in each of his two seasons. Additionally, the ISU’s fielding percentage improved by 20 points. In 2007, Indiana State posted a team fielding percentage of .987. Hoop made his greatest impact at ISU in the very important role of recruiting. His first class featured 22 players covering five states including two former Major League draft picks. His second recruiting class included 15 players, three of which were drafted by professional organizations.

Hoop arrived at Charleston Southern in December of 2004 after spending a year and a half as an assistant at Porterville College in California. At Porterville, Hoop served as the recruiting coordinator taking on three players who were selected in the Major League Baseball Draft and four student-athletes that went on to sign with Division I schools during the fall signing period. He worked directly with the catchers, infielders and hitters.

During his time as an assistant coach, Hoop has coached more than 30 players that have gone on to play professional baseball including 5 current big league players.

In 2005, Hoop served as manager of the Kelowna Falcons, a collegiate team in the West Coast Collegiate Baseball League, and head coach of the Langley Blaze in 2004, a summer league team in the Pacific International League. In the summer of 2003, Hoop was manager and head coach of the Central Cal Select Baseball club which won the West Coast National Championship in Reno, Nevada. Hoop's success did not stop there as his 2002 Triple Play baseball club team from Seattle, Wash., went on to win the USABA World Series in Carson City, Nevada, while placing fourth at the USABA World Series in 2001.

Hoop lettered as a catcher for Marshalltown Community College, in his hometown of Marshalltown Iowa, where he led the team in batting average, hits and RBI. He was a student assistant at Iowa State University in the fall of 2000.

In December of 2004, Hoop graduated from Fresno State University with a Master's Degree in kinesiology. He earned his Bachelor's Degree at Missouri Valley College in Marshall, MO. Hoop is married to Elizabeth Medlin of Monroe, NC who works as an athletic trainer for OrthoCarolina. They have a daughter Jordyn Elizabeth Hoop who was born on January 4th, 2015.

Coach Welsh will serve as the Bench Coach and oversee the pitching staff. Coach Welsh is no stranger to this role. Prior to South Meck, Coach led Nassau County (New York) in ERA for 3 consecutive seasons.

Before playing college baseball at St. Joseph’s College, Coach Welsh won back to back Catholic League State Championships in New York. At SJC, Coach Welsh went on to be a 4 year starter and 2x All Region Player.

Coach Welsh is well known around South Meck. He is currently a Counselor on Campus and serves as the Head Volleyball Coach. Coach currently resides in Charlotte ,his wife Allyssa whom teaches Kindergarten in CMS.

Coach Hall has been coaching baseball at various levels for the past 30 years. In addition to serving as an off-campus coach at South Mecklenburg, Hall is the founder and president of Remedy Advisors, LLC an independent employee benefits agency. Coach Hall has four sons: Chris (37), Michael (35), Matthew (27), Josh (23) and six grandchildren.

"John Travis Odom, a native of Gastonia, North Carolina graduated from Saint Paul’s High School in 2014, where he was a four-year varsity starter. He is a former middle infielder at Chowan University and Methodist University before ultimately graduating with his Bachelor’s Degree in Human Performance & Recreation from Claflin University in 2019.

He is currently working on his Master’s Degree with a dual major in Sports Management & Sport Coaching with an emphasis in NCAA Compliance at the United States Sports Academy.

He served as an intern for the University of South Carolina’s softball team where he was a special assistant to the hitting coach. His most recent stint was at Paul D. Camp Community College in Franklin, VA, where he was the hitting/outfield coach and oversaw the strength and conditioning program. He also served as the hitting coach for the Berkley Bandits in the Mid-Atlantic Collegiate League during the 2018 campaign. In 2019, he was the Head Coach for the Bandits of the Puerto Rico Collegiate League. In 2020, he will take the helm for the Bulldogs in the Mid-Atlantic Collegiate League as the head coach.